At dawn on 2006 April 7, the California coast was treated to an unexpected and interesting display. Many people saw it, but did not know what it was. The American Meteor Society even received sighting reports of a fireball.

In reality, the event was the launch of a Minuteman III missile from Vandenberg AFB. Known as "Glory Trip 190GB", the test flight sent an unarmed warhead on a ballistic trajectory to an impact area near Guam. Lift-off was originally set for 3:02 a.m. PDT, but two unplanned holds delayed it until 6:00 a.m.

The webmaster went to the mountains north of Santa Barbara expecting to photograph a night launch, but the unplanned holds delayed lift-off until well into morning twilight. In spite of the difficult lighting conditions, he was able to take a few usable photos of the event. The following images are noteworthy because they may be the only available still photos of the launch (the Air Force apparently did not obtain any usable photography). All images were taken with a Nikon D70 digital SLR and a vintage 24mm manual Nikkor lens. 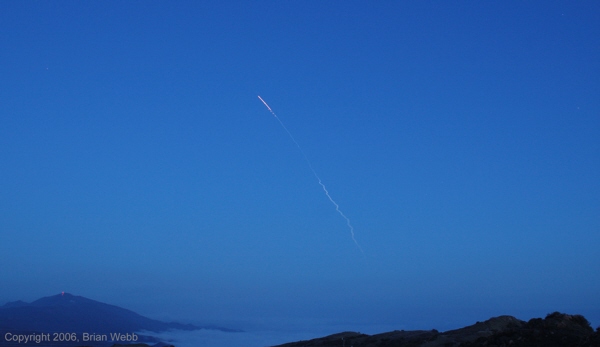 The first image shows the start of the second stage burn. The jettisoned first stage tumbled and flashed, creating the series of small dots just below the top of the missile trail. Low clouds are visible in the valley in the foreground. 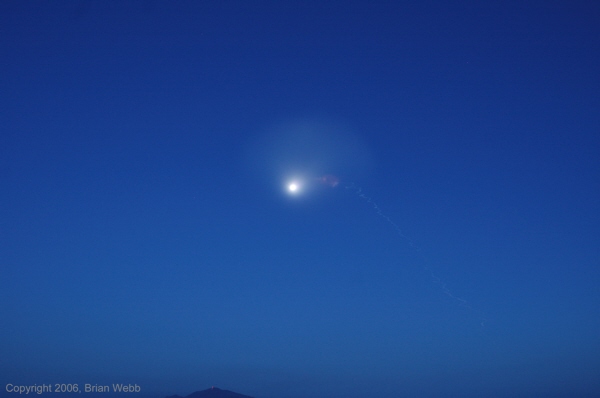 The next photo shows the third stage burn. The ground was still in twilight, but the missile had climbed high enough for Sun to illuminate the third stage exhaust. This created a large, glowing orb consisting of a bright, fuzzy core surrounded by a larger, tenuous area. The mountain at the bottom of the frame is Broadcast Peak. 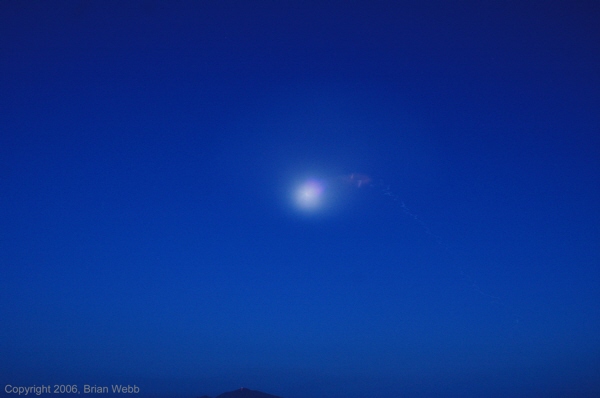 The third image was taken later in the third stage burn. At this point, the orb was less apparent and a magenta-colored area had appeared near the center of the exhaust plume.