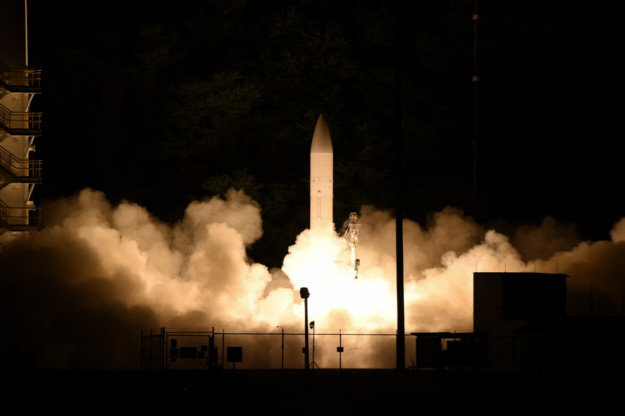 ALBUQUERQUE, N.M. - Sandia National Laboratories employees and contractors saw their work culminate in a hypersonic flight test conducted by the U.S. Navy and U.S. Army on March 19 at the Kauai Test Facility in Hawaii.

Information gathered from this and future experiments will further inform the Department of Defense's hypersonic technology development.

"Sandia is continuing its legacy of excellence in the national interest by providing advanced technology to ensure the protection of our nation and its war fighters," said Associate Labs Director Mike Burns, who oversees national security programs at Sandia. "I'm very proud of the contributions made by our team leading to this flight and thank the DOD and the National Nuclear Security Administration for the opportunity to make continuing contributions to the national hypersonic systems team."

Hypersonic flight is defined as air travel at least five times the speed of sound. Other vehicles, including ballistic missiles, can reach these speeds, but hypersonic missiles follow less predictable flight paths and are harder to detect by interceptors.

Sandia has been conducting hypersonic flight research for about 40 years, including the first successful flight test of a non-ballistic hypersonic glide vehicle in 1985. In 2018, a memorandum of agreement signed by multiple DOD agencies established a Sandia-developed design as the common hypersonic glide body that is now being further developed and produced by industry contractors. Since 2018, Sandia has also committed $40 million of its Laboratory Directed Research and Development funds to explore autonomy and machine learning technology for hypersonic flight vehicles.

The Kauai Test Facility is a rocket launch range operated by Sandia for the Department of Energy. It is located on the U.S. Navy Pacific Missile Range Facility, the world's largest test range. The facilities and personnel support a variety of missions including research and development, operational training and test and evaluation. Operational since 1961, KTF has supported more than 460 missions.