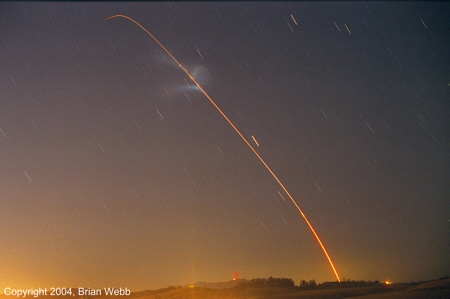 The 2004 July 21 test launch of a Peacekeeper missile from Vandenberg AFB is captured in this cropped image from a time exposure. The vehicle was launched from a silo at north base and sent eight unarmed warheads on a ballistic trajectory to the central Pacific. This photo was taken from a hill 105 statute miles (169 kilometers) east-southeast of the silo (assuming the vehicle was launched from silo LF-02).

The clouds near the top of the trail are either smoke puffs or venting from the missile around the time of stage 3 ignition. The clouds look diffuse because they were apparently dispersed by very high-altitude winds. Their bluish color is real and not an artifact.

The sky's orange cast is due to light pollution from nearby and distant city lights.