On 2007 April 25, a converted L-1011 airliner carrying a Pegasus XL rocket departed Vandenberg AFB. An hour later, the jet arrived at a three-dimensional point in space and released the Pegasus at 39,000 feet above the Pacific and 75 statute miles southwest of Monterey, California. The rocket functioned as intended and placed NASA's Aeronomy of Ice in the Mesosphere (AIM) spacecraft into a polar orbit.

The webmaster took the following images at Vandenberg AFB while covering the launch for a news organization. 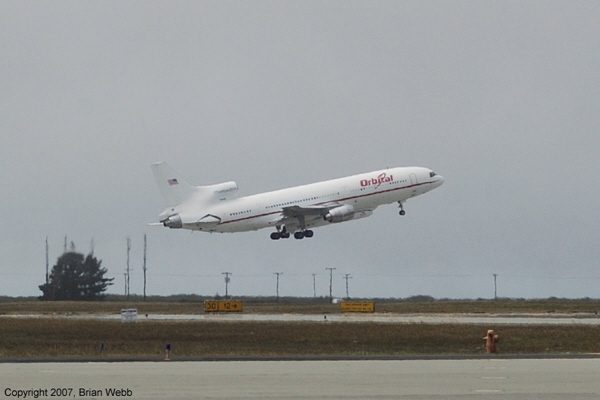 Stargazer, a modified L-1011 jumbo jet carrying the Pegasus XL rocket and AIM satellite, takes-off from Vandenberg AFB. Although it was cold and windy at the airfield, the concrete absorbed enough heat to cause shimmering, which degraded the quality of this image. 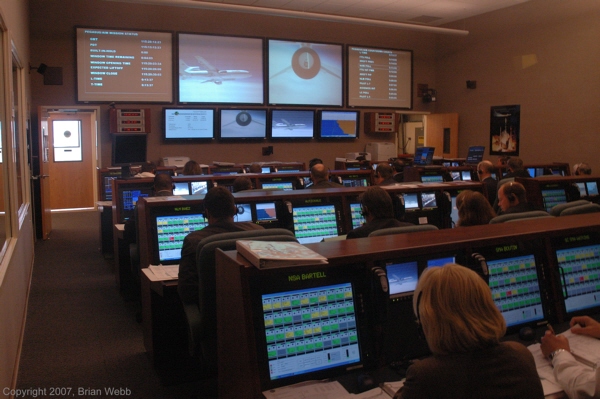 A government-industry team monitors events from the NASA launch control room in building 836(?) at Vandenberg AFB. Visible on the large screens at the front of the room is a view of the L-1011 launch aircraft from an F/A-18 chase plane and the back end of the rocket as seen from a camera under the L-1011. The webmaster took this hand-held photo under challenging lighting conditions.