The webmaster took the following images during the 1999 March launch of a Pegasus XL rocket carrying NASA's WIRE (Widefield Infrared Explorer) satellite. An L-1011 jumbo jet carried the rocket from Vandenberg Air Force Base to the drop point above the ocean southwest of Monterey. Although WIRE achieved orbit, a spacecraft malfunction prevented it from accomplishing its intended mission. These photos were taken from a vantage point 265 statute miles (427 kilometers) east-southeast of the launch point while covering the event for a news organization.

The launch was scheduled to occur long after sunset and expected to resemble a moving point of light. After launch, the Pegasus unexpectedly climbed into sunlight and provided an impressive display as the second stage exhaust plume was backlit by the Sun.

A few minutes later, the third stage fired and its plume was also illuminated by sunlight. Because of his obstructed horizon towards the south, the webmaster was not aware of this until it was too late to attempt a photograph. 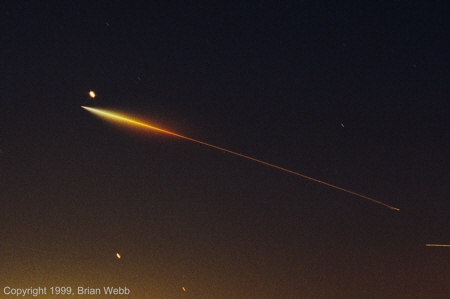 This cropped version of the original time exposure shows the second stage rocket motor burn. The camera was aimed at a point in the sky that the rocket was expected to pass through during the burn. The plan was to open the camera's shutter just before second stage ignition and hold it open to record the trace from the second stage.

Visible in the background are the planets Venus, Jupiter, and Mercury which resemble short dashes due to trailing caused by the Earth's rotation. The bottom portion of the sky has a brown color due to light pollution. The short line on the right margin is a trail from the lights on an aircraft.

BBC news later used this image on its website. 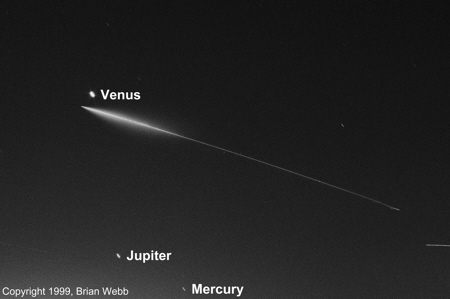 This is black and white version of the top photo with labels added to identify the planets in the background. 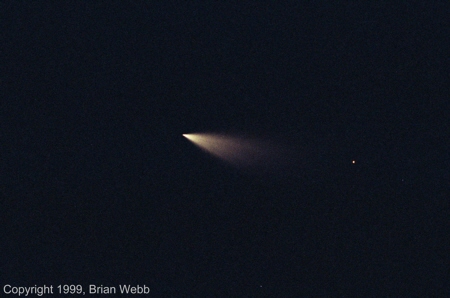 This brief exposure was an attempt to record the large, wedge-shaped exhaust plume during the later portion of the second stage burn. Unfortunately, it fails to capture the surprising amount intricate, feathery plume detail that was visible to the naked eye. The white speck to the right is Venus.